Danish architecture studio BIG has unveiled visuals of Masterplan Esbjerg Strand, a proposal for an education-focused campus and innovation hub surrounded by water in Jutland, Denmark.

Set to be built in the seaside town of Esbjerg, the irregularly shaped structure will feature a sweeping roofscape and central park, elevated on a platform seven metres above sea level and accessed by bridges.

Masterplan Esbjerg Strand forms part of Esbjerg of the Future Vision 2025, a plan to grow the town's population and transform it into a destination for education.

According to BIG, the facility will provide educational facilities that aim to challenge the country's existing pedagogy system to entice entrepreneurs to provide skills training.

"BIG's vision for Esbjerg Strand is to create an entire city in one building," explained the studio.

"The vision for the project Masterplan Esbjerg Strand is to form the framework for a city and campus environment that will rethink the approach to education."

BIG's irregular form and layout design for Masterplan Esbjerg Strand responds to the natural restraints on the site, including turbulent weather and climatic conditions.

"The new masterplan is informed by present environmental parameters at the site: noise from the harbor, dominant westerly winds, high tides and storm surges and sunlight," the studio said.

The completed building will be elevated on a platform seven metres above sea level to prevent the risk of flooding.

Its perimeter will be marked by angular white walls that are punctured by large windows, positioned to ensure each space has a view of either the park or the Wadden Sea.

The walls will jut in and out as they fold around the central park while changing in height to form the distinctive sweeping roofscape. At its peak, the building will be seven storeys.

An accessible green roof will crown the building and incorporate a 1000-metre-long pathway that undulates with the roof. 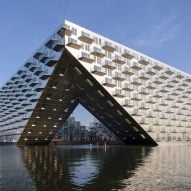 While improving opportunities and facilities for education in the country, BIG hopes that the masterplan will also establish the area as a tourist destination.

Details of its materiality are yet to be disclosed, but the visuals released by BIG suggest timber could be a predominant material choice.

The studio has also said the building's site will be powered by renewable energy sources and that the proposal will align with 11 out of 17 of the United Nations Sustainable Development Goals – a call to action to protect the planet.

"Education, development, and new communities will create the frame for a life, where the island with all its functions and possibilities works as a sustainable, human-made ecosystem in the middle of a city," concluded the studio.

Founded by Danish architect Bjarke Ingels in 2005, BIG is an architecture studio with studios in Copenhagen, New York, London and Barcelona.

Elsewhere, the studio recently completed a cantilevering housing block over IJ lake in Amsterdam and is developing BIG and Samoo unveil design for a "flood-proof" floating city Oceanix Busan.

The visuals are courtesy of BIG.