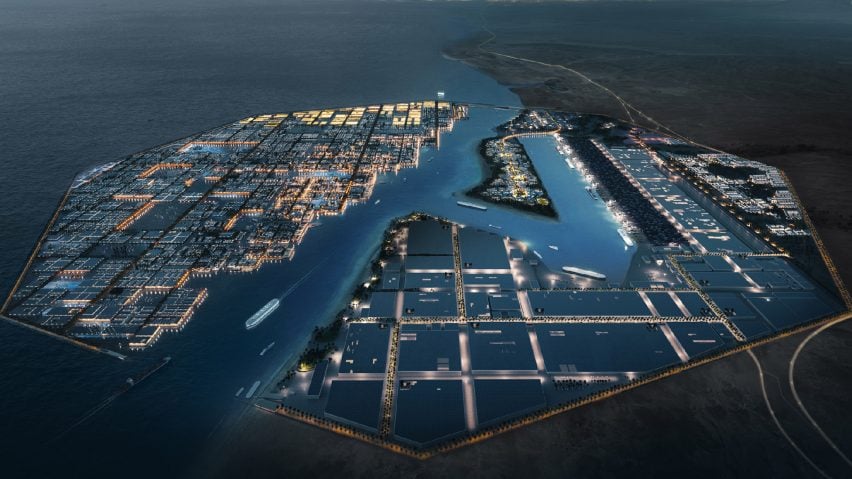 Saudi Arabia has revealed plans to build the Oxagon port and logistics hub, which would be the "world's largest floating structure", as part of the Neom development.

Set to be one of 10 regions within the Neom development in the northeast of Saudi Arabia, Oxagon will become a port city on the Red Sea, designed to take advantage of shipping travelling through the Suez Canal.

The city will act as a port and logistics hub for the wider Neom project – a renewable energy-powered region that forms part of Saudi Arabia's Vision 2030 plan to diversify its economy and minimise reliance on oil.

Oxagon will have a distinctive octagonal shape with part of the development on land and a large section protruding into the Red Sea.

Divided from the land by a shipping canal, the Neom developers claim that the off-shore section of the city will be the "world's largest floating structure".

The floating city will be arranged around water-filled squares connected by small canals. It will also contain a cruise terminal and oceanographic research centre.

"Oxagon will be the catalyst for economic growth and diversity in Neom and the Kingdom, further meeting our ambitions under Vision 2030," said Saudi Crown Prince Mohammed bin Salman.

"Oxagon will contribute to redefining the world's approach to industrial development in the future, protecting the environment while creating jobs and growth for Neom. It will contribute to Saudi Arabia's regional trade and commerce and support creating a new focal point for global trade flows."

Oxagon will feature in the controversial Neom development alongside a luxury island designed by Luca Dini Design and Architecture, a ski resort designed by Zaha Hadid Architects, UNStudio, Aedas, LAVA and Bureau Proberts and a 170-kilometre-long city named The Line.

Designed by US studio Morphosis, The Line is a mirror-clad skyscraper city for nine million people that has been criticised for its sustainability and human rights impacts.

Earlier this year experts told Dezeen that the project's sustainability and liveability claims were "naive", while human rights organisation ALQST reported that three members of the Huwaitat tribe who are believed to have criticised displacements connected to Neom had been sentenced to death.

Following the news, Amnesty International's Peter Frankental told Dezeen in an interview that the architecture studios designing Neom were facing a "moral dilemma" and should "think twice" about their continuing involvement in the project.