Phoenix-Based Creation Lands on the Inc. 5000 List of Fastest-Growing Private Companies in America

With 492% Revenue Growth Over the Past Three Years, Creation Places 1,328 on the Prestigious List 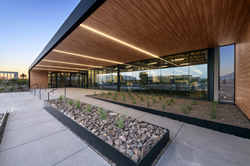 "We have expanded our portfolio to include $4.65 billion of ground-up developments in the major growth corridors around the country. In 2022, we’ll experience even further growth with nearly $1.5 billion in mixed-use office, retail and multi-family projects in the pipeline," said David Sellers.

Creation, a real estate development and alternative investment firm headquartered in Phoenix, announced today its debut on the Inc. 5000 list of fastest-growing private companies in America, with an impressive 492% three-year growth rate, solidifying its place as one of the fastest-growing real estate developers in the country and No. 1 in that same category in Arizona.

Founded by David Sellers and Bob Agahi in 2018, Creation’s rapid growth streak places it 1,328 on this year’s prestigious list and notably, Creation is the only commercial real estate development company in Arizona to make the list in recent years. Inc.’s yearly list tracks companies’ self-reported revenue growth and highlights those with the highest percentage growth during the previous three years. This year, growth from 2018 to 2021 was measured.

“It’s an honor to be among America’s fastest-growing private companies and a testament to the talented team and strategic partnerships we’ve built over the past four years,” said David Sellers, co-founder of Creation. “In that time, we have expanded our portfolio to include $4.65 billion of ground-up developments in major growth corridors of Arizona, Texas, California, Colorado, Tennessee, New York and New Jersey. In 2022, we’ll experience even further growth with nearly $1.5 billion in mixed-use office, retail and multi-family projects in the pipeline.”

The company’s portfolio falls into three divisions – Creation RE, handling industrial, mixed-use and office real estate development; Creation Hospitality, developing, operating and partnering in some of the most successful hospitality concepts in the country; and Creation Ventures, an alternative investment platform focused on early-stage, growth-equity opportunities through direct investing or investing in existing, proven venture capitalist funds. With headquarters in Phoenix, Creation opened a second office in Dallas in 2021 and is currently planning to open a third office in New York City in early 2023.

In April of this year, the company made national headlines when it announced a joint venture with institutional investors advised by J.P. Morgan Global Alternatives that will invest $1 billion in industrial, warehouse and logistics real estate projects across four states.

“We’re just scratching the surface,” Bob Agahi, co-founder of Creation. “Creation is on track to have one of the most diverse investment platforms in the country. From real estate to hospitality to start-up businesses, we have an incredible team that can execute on all fronts. We’re actively pursuing many private equity and alternative investments and look forward to aggressively growing our business interests.”