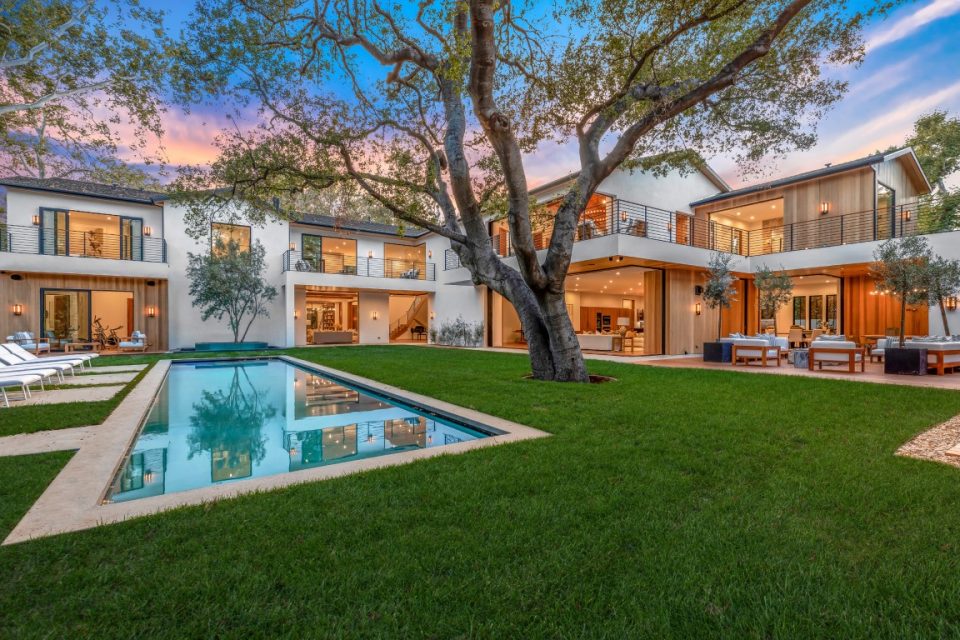 “Henry Ford Estate Sold – As Seen In Succession”The 42-acre estate of Henry Ford, II, which was priced at $175 million in 2017 and later reduced to $145 million, has sold for $105 million.  The estate has recently been seen as the summer home for the wealthy Roy family in the HBO series Succession.  The final price  marked the most expensive single-parcel sale in Hamptons history.

“Enchanting Oasis of TV's Black-ish Star Nicole Sullivan”Nicole Sullivan is best known for her acting roles in the TV series Black-ish and The King of Queens but her charming cottage-style home in LA's Laurel Canyon is a colorful example of her keen eye and romantic take on the type of environment that shows her true personality. She put it on the market in late 2021, priced at $1.45 million. It soon sold at over the asking price for $1.785 million.

“Kirk Douglas Beverly Hills Home For Sale”A Beverly Hills home that Kirk Douglas bought in 1976 and lived until his death in 2020 at age 103 is for sale. Quite modest for the home of a big movie star, the most interesting part of the four-bedroom home are the location and the cement blocks in his yard that were signed by stars such as Elizabeth Taylor and Barbara Streisand. Although the home's list price is $7.495 million, the listing agent expects the home to sell for much more, due to the land value.

“Jim Belushi Sells LA Home”It took over four years and multiple listings but Jim Belushi has sold his Brentwood Park home for $30 million. Belushi bought the land in 2003 and 2007 and then had the seven-bedroom, over 14,000-square-foot home custom built. Jim put the home on the market at $38.5 million in 2017 and then raised and lowered the price until it finally sold. The former Saturday Night Live actor is currently running a cannabis farm in Oregon.

“Joe Jonas & Sophie Turner Join Celebrity Surge In Florida”Joe Jonas and Sophie Turner are the latest celebrity couple to join the migration to Florida with their purchase of a contemporary-glass home in Miami's Bay Point neighborhood.  The English actress and Jonas Brothers singer paid $11 million for the six-bedroom waterfront home. Other celebs who have made the Florida move include Tom Brady and Gisele Bundchen, Joshua Kushner and Karlie Kloss, Cindy Crawford and Rande Gerber, Ivanka Trump and Jared Kushner, and Sylvester Stallone.

“Arnold & Maria's Home”Privately tucked away on a country lane that meanders off of Sunset Boulevard in Los Angeles is a small community of 16 secluded homes that has attracted world-famous politicians, actors and industry leaders. One house on the sparsely populated lane was previously the home of former California Governor Arnold Schwarzenegger and his then-wife, Maria Shriver. It is now for sale, priced at $11 million.

“Kiss Gene Simmons' Vegas Home Goodbye”Kiss's Gene Simmons bought an 11,000-square-foot contemporary home in Las Vegas earlier this year for $10.8 million, but wasn't a fan of the hot weather. Gene has already put the six-bedroom home on the market at $15 million.

“Shaq Gets Shorter Price on Florida Home”Shaq O'Neal's massive Lake Butler estate in the private golf community of Isleworth, Florida, about 30 minutes southwest of Orlando, sold for $11 million. Features of the 31,000-square-foot home include a dance studio, recording studio, and a wall mural of a true-to-size, red tractor-trailer barreling toward the interior of the room with Shaq in the driver's seat.