Named 3D Housing 05 the prototype one-storey house – which will be showcased at Milan’s design festival, Salone del Mobile in April 2018 – has a living area, bedroom, kitchen and bathroom and covers an area of 100 square meters.

It has been designed to be disassembled and relocated and is currently being printed on site, in Milan’s central square, Piazza Cesare Beccaria.

The structure is being built using a mobile 3D printing robot supplied by Netherlands firm Cybe Construction. This uses concrete to print the walls; the roof, windows and doors. Italcementi, one of the world’s largest cement suppliers, is providing the base mix for the concrete used during the printing operations.

This latest development is one of a number of efforts worldwide to apply 3D printing to home-building. Earlier this month (March 2018) The Engineer reported that US construction technologies firm Icon had demonstrated a method for 3D printing a single storey house in less than 24 hours. 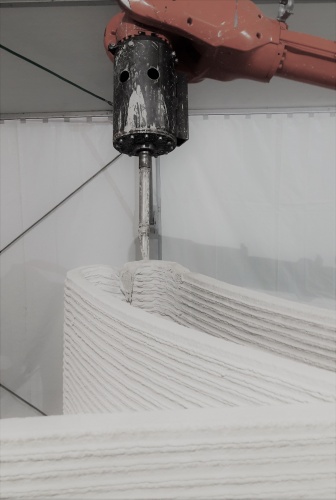 Arup – working with CLS Architects on the design – claims that as well as reducing waste during the building process, 3D printed buildings can be designed to ensure that components can be reused in the future.

“The construction industry is one of the world’s biggest users of resources and emitters of CO2,” said Guglielmo Carra, Europe Materials Consulting Lead at Arup. “We want to bring a paradigm shift in the way the construction industry operates and believe that 3D printing technology is critical to making buildings more sustainable and efficient. It creates less waste during construction and materials can be repurposed and reused at the end of their life.”

We believe 3D printing will contribute to breaking the conventional barriers in engineering and architecture
Luca Stabile, Arup

The company claims that as well as being less expensive than traditional construction techniques, due to the more efficient use of materials, the design flexibility offered by 3D printing means that complex structures – such as double curved walls – can be produced at a lower cost.

Arup added that because 3D printing offers a direct transfer of information from the 3D design model into construction operations, it also drastically reduces building inconsistencies and potential mistakes.

“We believe 3D printing will contribute to breaking the conventional barriers in engineering and architecture,” said Luca Stabile, Italy Building Practice Leader at Arup. “The use of new technologies alongside a new digital approach to the built environment will be instrumental to creating even more complex multi-storey 3D printed buildings.”