New York, N.Y. –Today, Nearabl Inc., the metaverse of accessibility company, announced a partnership with Bentley Systems, Incorporated (Nasdaq: BSY), the infrastructure engineering software company, to expand the use of its technology within the global infrastructure, construction, and design industries. The company is now an iTwin Premier Partner, and its Nearabl app has achieved the “Powered by iTwin” designation.

“We are thrilled to announce this partnership! It is a gigantic step towards establishing our imprint on the infrastructure market. As an academic spin-out, integrating with Bentley’s open-source digital twin technology was a no-brainer for many reasons,” said Arber Ruci, CEO and Co-founder at Nearabl, Inc. “Where we found the most value was in familiarity and ease of use for our end-users — we launched as a mobile-first application to great initial early reviews of our mobile visualization but soon enough we realized that our end users were much more comfortable editing and changing Nearabl mobile content on an iTwin desktop/web interface. We quickly integrated the process and have been deploying it in some cool places.”

“We are delighted to have Nearabl, Inc. add their Nearabl iOS application to the Powered by iTwin program,” said Sheena Gaynes, Director, Business Development, iTwin Platform, at Bentley Systems. “In doing so, Nearabl joins the growing ecosystem of software developers enabling digital twin solutions with the Bentley iTwin platform. Nearabl is a great example of how BIM and augmented reality (AR) can be combined and visualized in a mobile app to improve the safety and productivity of construction teams.”

When combined with digital twin technology, Nearabl’s world-class indoor navigation accuracy and augmented reality visualization lays the groundwork for a built-world metaverse, creating the potential for significant innovation in the design, construction and maintenance of infrastructure around the world.

Nearabl is a wayfinding and navigation tool that allows users to view accurate digital indoor maps and signage, record new paths and points of interest, and expand access to physical experiences. Easy to use, affordable, and customizable, the company’s technology has been deployed to serve diverse audiences, including, construction site managers, digital tourists, people with low vision and metaverse enthusiasts. Nearabl’s technology is the work of 25 world-class researchers in advanced robotics, computer vision and mixed reality. Born out of a university-backed research center, Nearabl has leveraged New York State’s robust innovation ecosystem to accelerate its growth and continuously enhance its technology.

To learn more, go to nearabl.com/digital-twins.

Originally created to serve the navigation and wayfinding needs of individuals with blindness or low vision, Nearabl was built in pursuit of a mission to create a metaverse of accessibility. The New York City-based startup digitizes physical experiences in buildings and cities by adding a layer of 3D images and sounds.

About the Bentley iTwin Platform

All trademarks are the property of their respective owners.

Bentley and iTwin are either registered or unregistered trademarks or service marks of Bentley Systems, Incorporated or one of its direct or indirect wholly owned subsidiaries. 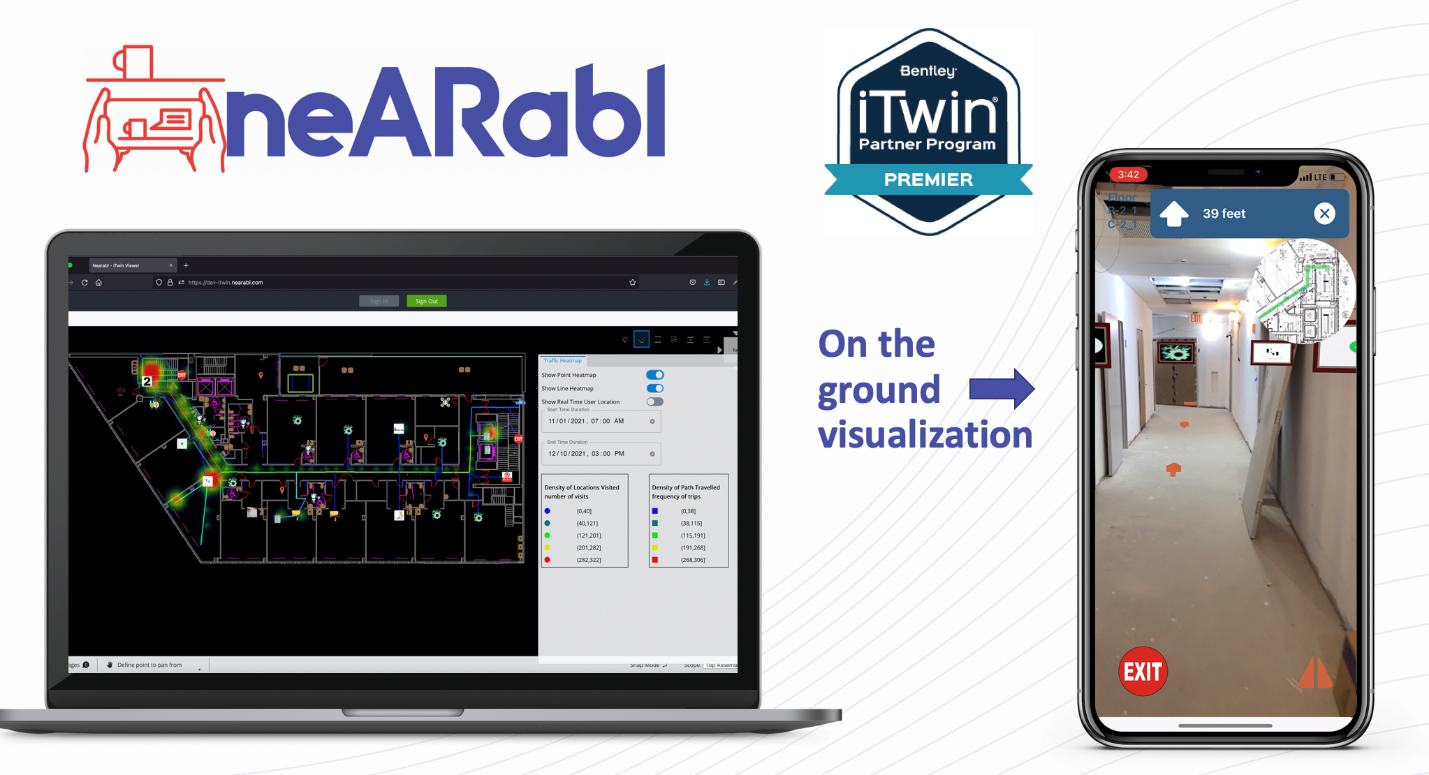 Powered by iTwin, Nearabl’s world-class indoor navigation accuracy and augmented reality visualization lays the groundwork for the metaverse of the built world.