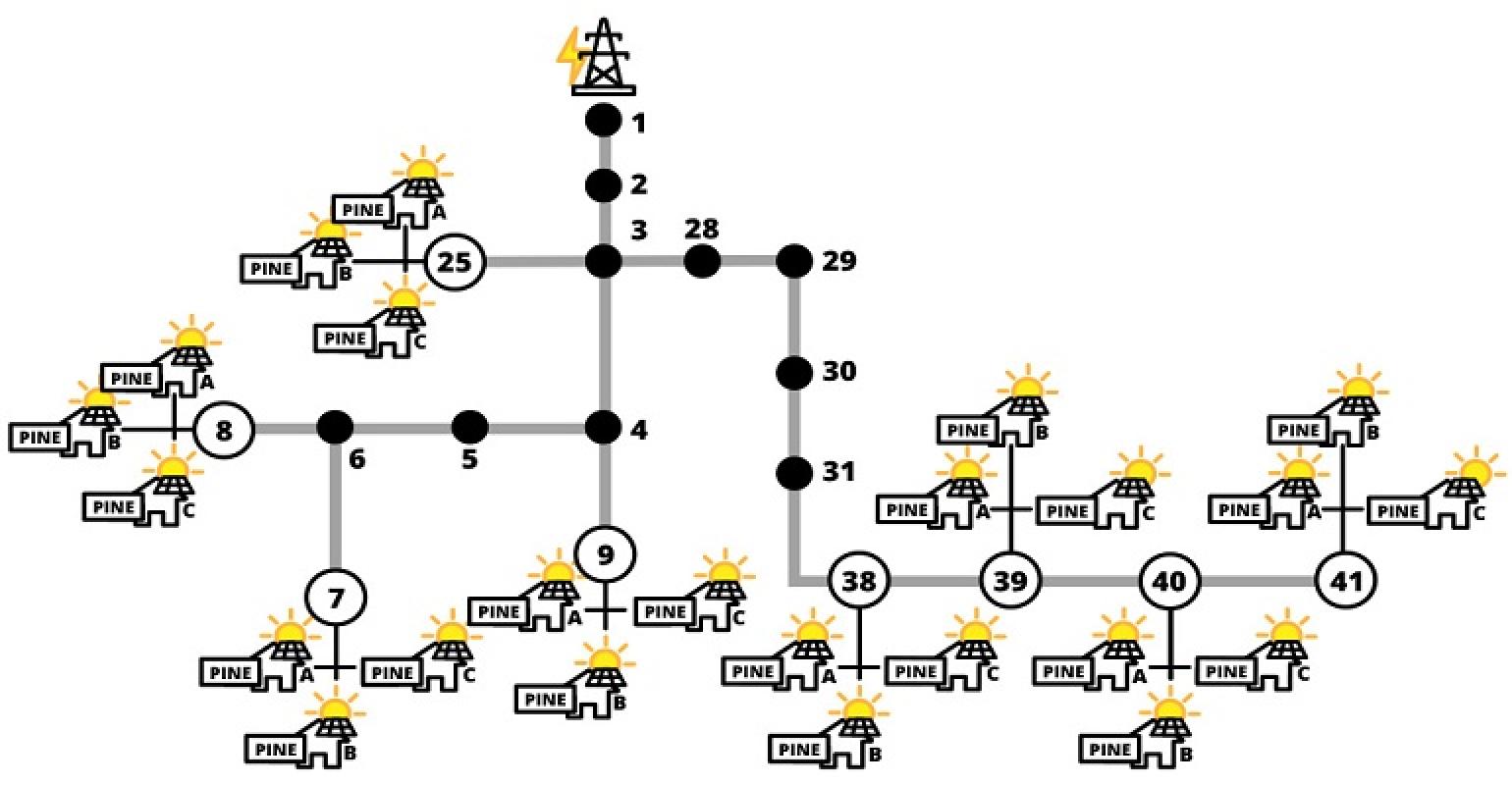 A mixed neighborhood of houses with solar and houses without designed and tested in a computer simulation by Texas A&M researchers to test a new smart energy device. Open circles denote nodes where homes have the PINE device and its related systems. Dark, filled circles are nodes where homes do not have PINE. All homes receive energy from the grid.
A device developed at Texas A&M helps improve energy delivery between solar-powered homes and the electricity grid.

Researchers have developed a new smart device that can help homeowners make their homes less dependent on the electrical grid by improving the flow and control of energy between the grid and residential solar-power systems.

A team from Texas A&M University has designed a smart device that can help improve energy delivery between the solar-power systems at a residential site and the electrical grid.

Related: How has COVID-19 Impacted Renewables and the Grid?

The device—called the power electronics intelligence at the network edge, or PINE—is aimed at helping both the homeowner and the utility control energy distribution in a cost- and energy-efficient way.

Calling the device “an intelligent energy router,” one of the researchers said it can help control the flow of energy between the electrical grid and any solar-panel configuration people have set up in the home to help ensure energy is not lost or wasted.

Related: Will Coronavirus Infect the US Power Grid?

“It regulates the grid voltage, integrates solar energy, which is locally produced, and intelligently manages and routes the energy in all directions,” said Prasad Enjeti, a professor of analog engineering in the Department of Electrical and Computer Engineering at Texas A&M, in a press statement.

Solar panels have dropped in cost over the last decade and so are a cost-effective and renewable way for people to provide power to their homes. This has inspired more widespread installation and use of residential systems that use rooftop solar panels.

These systems generally feed energy from the panels into an inverter before the electricity is ready for residential use as well as charge solar back-up batteries. Another set of power electronics typically connects the solar panels and the batteries back to the grid.

While these conventional systems may provide renewable power to a home, they also have some notable disadvantages, especially since they are constantly connected to the grid as long as they are functional.

One problem is that voltage fluctuations in the grid, due to damage to the power lines or overloading, affect connected devices in homes, researchers said. The current injected into the grid from solar-powered homes can have certain irregularities, known as harmonics, that affect the quality of the grid’s power.

Another issue is that a utility company can’t do much to limit the amount of grid electricity consumed by solar-powered homes. This drawback can be risky during natural disasters, when other communities or essential services, like hospitals, need energy support, Enjeti said.

“Currently, there's no system in place to regulate or limit energy consumption,” he said in a press statement. “End users with solar-powered systems continue drawing electricity from the grid because utility companies have no way of controlling it.”

PINE potentially can be used to solve these issues. The device can be installed outside a home to simplify the connection between residential solar systems and the grid. PINE has three main connections: one going to the home, one to the utility grid, and another to the solar panels and batteries, and can control the flow of electricity in any one of these directions.

The device can be programmed so that an authorized external user, such as the utility company, can control the amount of grid electricity reaching the home it’s hooked up to, Enjeti said. PINE systems installed at different homes can also be programmed to communicate with each other and with the distribution operator.

Researchers published a study on their work in the Institute of Electrical and Electronics Engineers’ Journal of Emerging and Selected Topics in Power Electronics.

To test PINE and its ability to create networks that function as researchers envision, they built a device prototype and used extensive computer simulations to create a scenario in how it would work in a mixed neighborhood, where some homes had PINE systems and others did not.

The tests demonstrated that the homes with the PINE system had a cleaner, stable voltage. The injected voltage from these homes at the grid level also was stable because the PINE system was regulating that as well.

Elizabeth Montalbano is a freelance writer who has written about technology and culture for more than 20 years. She has lived and worked as a professional journalist in Phoenix, San Francisco, and New York City. In her free time, she enjoys surfing, traveling, music, yoga, and cooking. She currently resides in a village on the southwest coast of Portugal.