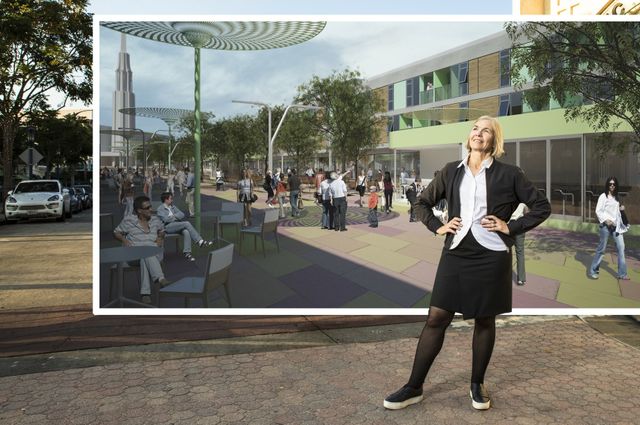 For a few weeks in the spring of 2015, in a patio behind UCLA’s Broad Art Center in the northeast corner of campus, stood a new building. It wasn’t a classroom or a lecture hall. It was a house.

Just 350 square feet, with a frame of two-by-fours and bent metal poles wrapped in translucent plastic sheeting, the house was aggressively unconventional — in its site, its materials, and especially in its size. And that was the point. This home was a prototype of the future house of Los Angeles — a small, cheap-to-build and environmentally sustainable structure that could fit in the backyard of nearly any of L.A.’s million dollar-plus single-family homes. Designed and built by Kevin Daly Architects and a team of architecture students, the house was a class project, but also a proof of concept for a bold proposition: solving the city’s housing crisis.

This project was conceived and built by cityLAB, a multidisciplinary think tank within UCLA’s Department of Architecture and Urban Design. As its name suggests, cityLAB conducts research and experiments on the city and its design, using the tools of architecture and urban planning to take on the biggest challenges facing urban areas around the world — from housing affordability to the role of transportation in urban development to the interior and exterior spaces of a future defined by automation. Through a mix of scholarly research, design studio problem solving and speculative proposals, cityLAB thinks deeply about — and tries to shape — the 21st-century city.

Architecture Professor Dana Cuff founded cityLAB in 2006, when the future of the city was an open, and sometimes confounding, question. It was just a few months after New Orleans had been devastated by Hurricane Katrina, and a few years after New York had suffered destructive terrorist attacks. These extreme conditions, compounded by increasing urbanization and climate change worldwide, urged Cuff to rethink what role architects like herself should and could play.

“It seemed to me that architecture just didn’t have the responsibility and capability that it needed to have to respond to these really urban crises,” Cuff says. The complex future of cities needed a more complex set of answers. “If we tied in to politics, tied in to economics and could collaborate across the spectrum of city builders, we could actually innovate and experiment,” she says.

So she began playing the role of convener, partnering with researchers, faculty and students from across UCLA and in the public sector to develop proposals and policies that could address the big issues of this new urban future.

“An architect would solve a particular building problem with a project on a specific site. We don’t do that. We always work on projects that are demonstrations of how you could approach many other sites and projects with the same circumstances,” she says. “The fundamental premise of cityLAB is that we do projects that are prototypes.”

Over the years, project teams have looped in engineers, computer scientists, designers, planners, architects, economists, city department heads and politicians. Though framed as an academic think tank, cityLAB is actually a bridge between academics and action. “We bring the force of the university to bear on the city,” Cuff says.

A 2011 effort started by looking right down the street, in Westwood Village. Springboarding off plans for a new subway station to eventually be built at the intersection of Westwood and Wilshire boulevards, cityLAB set out to collect ideas and create a vision for the future of the village. Observations of the area and interviews with community members led to a few key takeaways: The village had a glut of underutilized commercial space that wasn’t capitalizing on its close proximity to UCLA’s campus, and changing transportation patterns were demanding a new approach to traffic management.

A team of students and architects used these findings to imagine what a better Westwood Village would look like. They suggested spreading UCLA’s special events off campus to enliven vacant or underused commercial spaces by, for instance, hosting music and theater performances in the village’s historic movie houses.

To address a growing volume of pedestrians and cyclists ahead of the new subway’s opening, they replanned the village as a “car-lite” zone, reducing infrastructure dedicated to cars. A proposal led by architect and UCLA faculty member Neil M. Denari adds a dedicated bus lane in the center of Westwood Boulevard and pushes all vehicular traffic underground, devoting the surface level entirely to pedestrians and cyclists — as well as to pastel-painted outdoor patios and public gathering spaces.

The images that resulted from this project are almost fantastical compared to the Westwood Village of 2011 (or even today). The idea of handing street space from cars to pedestrians “seemed to make people’s hair stand on end,” Cuff says. And that was sort of the point. Showing people what a place like Westwood Village could be, she argues, will hopefully make them think harder about what it currently is and how it might need to change.

This speculative approach is one cityLAB has taken with a wide variety of topics, more recently in an exploration of the future of work and office spaces and how coming changes may affect business hubs like downtown Los Angeles, Century City and the Westside. In collaboration with the L.A. office of the global architecture firm Gensler, cityLAB tracked the evolution of office spaces, workers and equipment from the 1860s to the present, picking out the key factors that have determined their physical characteristics over time. They found that in the digital era, the role of physical spaces is changing dramatically.

What form these spaces should take became the question at the heart of an 18-month partnership with NASA’s Jet Propulsion Laboratory, in which cityLAB and its partners used these findings to design new physical spaces and furniture to encourage collaboration and the concentrated work JPL calls “deep think.” The partners created a series of alternatives to conventional office and workplace design.

One, designed by architect and UCLA Architecture and Urban Design (AUD) lecturer Marta Nowak, proposes a multi-configuration workspace within a wheel structure that enables a user to sit, stand or recline inside it — as well as to roll the whole thing to new locations or to connect with other wheels to collaborate. Another, by architect and UCLA AUD lecturer Güvenç Özel, reflects the increasingly fluid nature of what constitutes a workday, combining work and leisure spaces into an outdoor pavilion with a shade that moves as the user occupies different parts of the structure.