This Regenerative Building Material is Made From Sand and Bacteria

Combine sand, gelatin and bacteria, let them rest and watch one brick turn into eight. 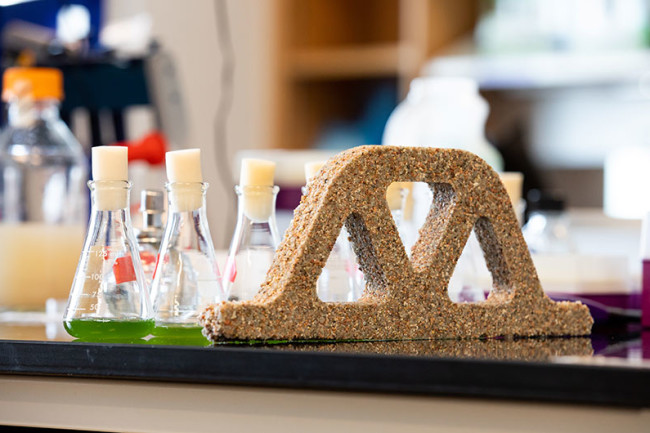 An example of the bacteria and sand building material. (Credit: College of Engineering and Applied Science at Colorado)

(Inside Science) -- Castles made of sand could, with the help of bacteria, grow copies of themselves and become as strong as the cement that commonly holds bricks together, a new study suggests.

After water, concrete is the most used material on Earth, at a rate of about 3 metric tons used per year for every person in the world. Cement, the primary component of concrete, is the oldest artificial construction material, dating back to the Roman Empire.

Cement and concrete have changed little as technology for more than a century. Now scientists are seeking inspiration from natural processes, such as the way colonies of coral polyps build reefs.

"We want to blur the boundaries between the natural world and the built environment, between what is nonliving and what is living, and create a material that displays both structural and biological functions," said materials scientist Wil Srubar, who heads the Living Materials Laboratory at the University of Colorado Boulder.

The researchers started with sand, gelatin and a kind of photosynthetic bacteria known as Synechococcus that is widespread in ocean surface waters. The gelatin retained moisture and nutrients for the bacteria to proliferate and mineralize calcium carbonate in a way that is similar to how seashells form.

In experiments, the resulting material was roughly as strong as typical cement-based mortars.

"I have a small cube of the material on my desk that is 2 inches across that I can stand on," Srubar said.

The material not only is alive, but can reproduce. When researchers halve one of the bricks, the bacteria can help grow those halves into two complete bricks when supplied with extra sand and gelatin. Instead of manufacturing bricks one by one, the researchers showed they could grow up to eight bricks from one.

"Conventional manufacturing approaches make one widget at a time," Srubar said. "By using one brick to grow two bricks, and then four, and then so on, we can explore the idea of exponential manufacturing of building materials. Given that time is money, I think anyone involved in manufacturing would find speeding up manufacturing time very interesting."

Previous research used bacteria to repair cracks in concrete and oil and gas wells by mineralizing calcium carbonate. However, such work typically used microbes that fare very poorly in typical materials used like cement, which are highly acidic -- only 0.1 percent to 0.4 percent of such bacteria survived after 30 days. In contrast, in this new work, 9% to 14 percent of the bacteria remained viable after 30 days assuming at least 50 percent humidity was maintained.

One challenge the scientists face is that the material needs to get completely dried out to reach its maximum strength, but such drying stresses out the bacteria. To help keep the microbes alive, the researchers currently have to control the humidity surrounding the material.

"We're looking to create a desiccation-tolerant strain of bacteria so that we can get full structural capacity while also enhancing microbial viability in super-dry conditions," Srubar said.

All in all, "we're particularly excited about the possibilities of this material technology in austere environments with limited resources," Srubar said. "If you have microorganisms that can grow structural materials in remote places, that could help build everything from a military installation to human settlements on other planets."

Srubar said the current research acts as a proof of concept for the stronger compounds that could be made with the technique.

Ultimately the scientists envision using microbes that not only help build materials but impart structures with extra biological functions.

"You can imagine bacteria that provide materials with self-healing capabilities, or can sense and respond to toxins in the air, or can interact with the environment in other ways," Srubar said. "The sky's the limit with creativity."

"I find it exciting that this new work develops materials that are truly living, in that the microorganisms incorporated into their materials survived at very high rates over time periods of weeks," said Anne Meyer, a synthetic biologist at the University of Rochester in New York, who did not take part in this research. "Creating a truly living material allows the possibility of using genetic engineering techniques to add additional behaviors to the microbes living within the material. Could you incorporate a microbe that could respond to environmental cues to change the toughness or stiffness of the bacteria?"

She added that it might be possible to combine the new research with work from her lab that uses 3D printers to build shapes from bacteria.

The scientists detailed their findings online Jan. 15 in the journal Matter.

[This article originally appeared on Inside Science. Read the original here.]